Dennis Jacob, of Kankakee, volunteering to help Za’Myiah Franks,5, of Bourbonnais, cycle through the toy isles at Meijer in Bradley looking for Christmas gifts for children thanks in part to funds raised during the 2018 Turkey for Tots Fundraiser.

As if conducting an orchestra, Peggy Lecour talks about her works on display at the Edward E. Mortell House during the Community Arts Council Art Walk in the Kankakee Historic Riverview District. 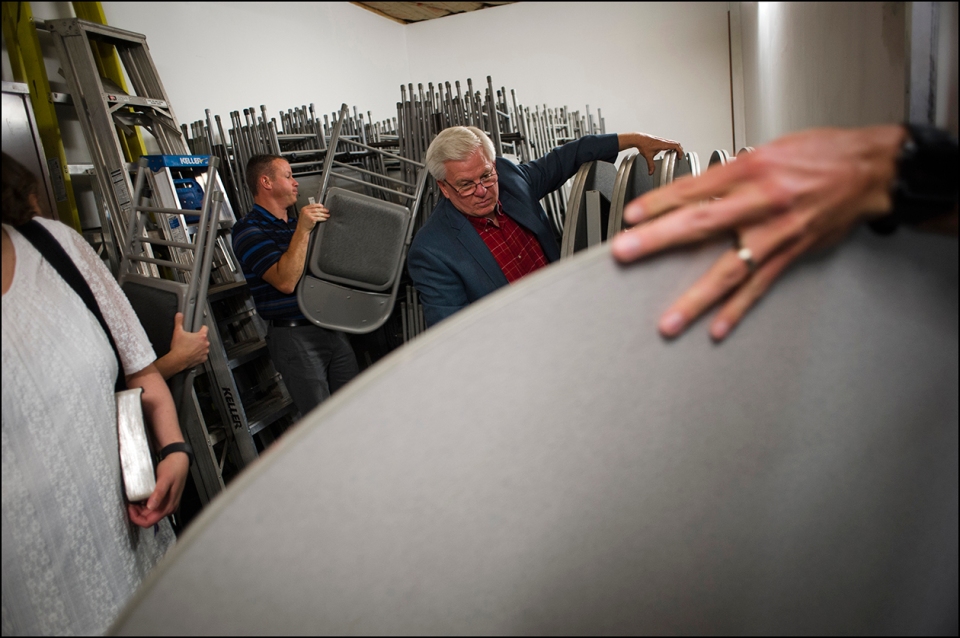 Jack McCormick helps to put chairs and tables away after his Sunday School class at Manteno Church of the Nazarene. McCormick is set to retire from the church after 32 years of service.

Kankakee “White City” residents from left, Connie Nanos, Pete Christopher, and Pauline and Cam Hebert, pose for a portrait while talking about the old neighborhood outside Nanos’s house.

Ian Hellings poses for a portrait in front of his British made P70 Invacar at his Momence shop. 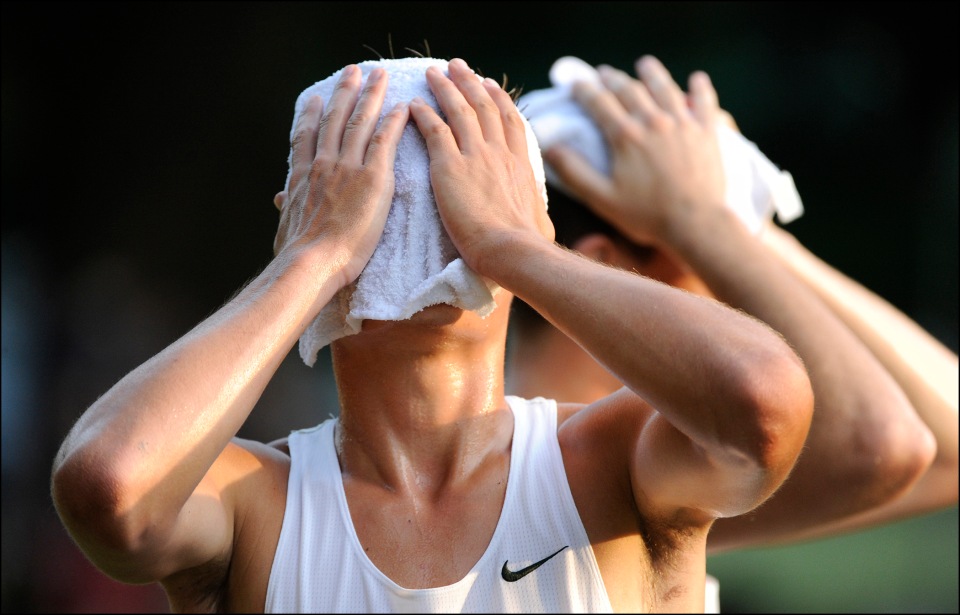 A cross country runner places a cold, wet rag over his face after completing his leg of the annual Irish Conditioner at Small Park in Kankakee. Although evening was creeping in, the temperature at the race was hovering at about 90 degrees.

Jack Ford,13, of Limerick, Ireland, walks back to his car after leaving the drivers’ meeting on a Friday night at the Kankakee Speedway. Ford races at the speedway during the summer while visiting his father who lives in Tinley Park.

Kankakee Community College’s Mike Rainbolt, center, is mobbed by teammates after driving in the winning run in the first game of a doubleheader with Black Hawk College. 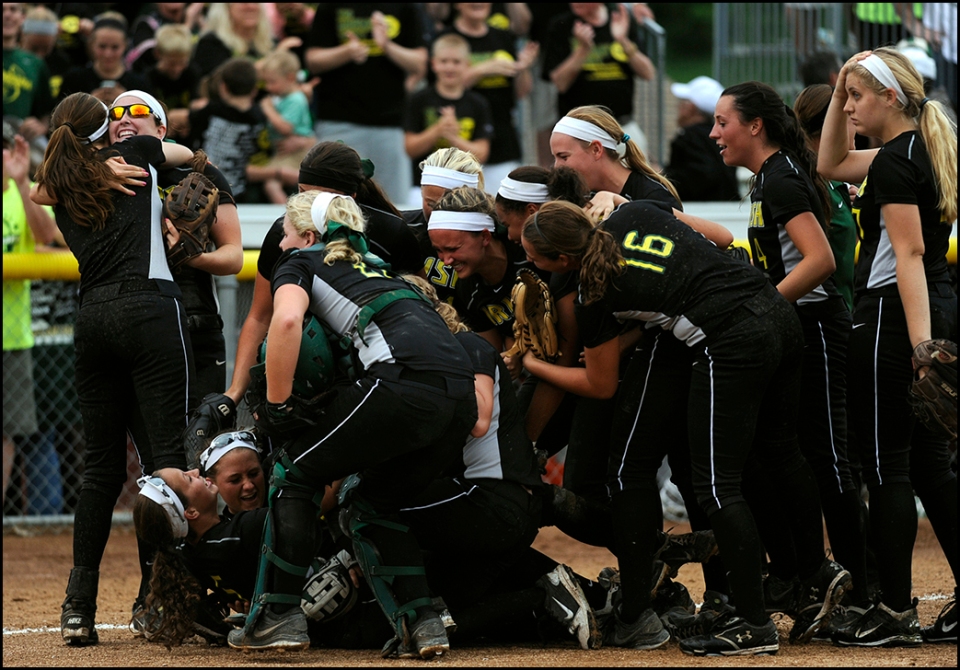 The Bishop McNamara Fightin’ Irish celebrate their semifinal win against Nashville after Alee Rashenskas made the final out with the tying run in scoring position in Peoria.

Coal City High School’s Morgan Youskevitch smiles at a teammate in the seventh inning on the verge of a win over Wilmington High School.

Bishop McNamara Catholic High School’s Kyleigh Payne rounds first base after her solo-home run in the fifth inning as the crowd behind her erupts in a Class 2A regional championship against Manteno High School. Payne’s home run gave the Irish a 2-1 lead.

Bob LeClair, of Clifton, prepares to throw a dart during a game of Baseball Darts in the parish hall of St. John the Baptist Church in L’Erable.

Josh Barker,7, looks out the door of his Bradley home with his rescued pitbull, Bella. To the right is Angel, a rescued South African Boerboel.

Dick Kozuch is silhouetted by the light illuminating his collection of nearly 3500 golf balls in his Manteno home.

Mario Maglione Jr.,of Kankakee, a crew member at the Kankakee Motor Speedway, laughs during racing action at the Kankakee Fair Grounds. Crew members were having difficulty seeing Maglione on the northeast corner of the track so when he found the blue glowing glasses at the Fair, he thought they would be a perfect fit to make him more visible. 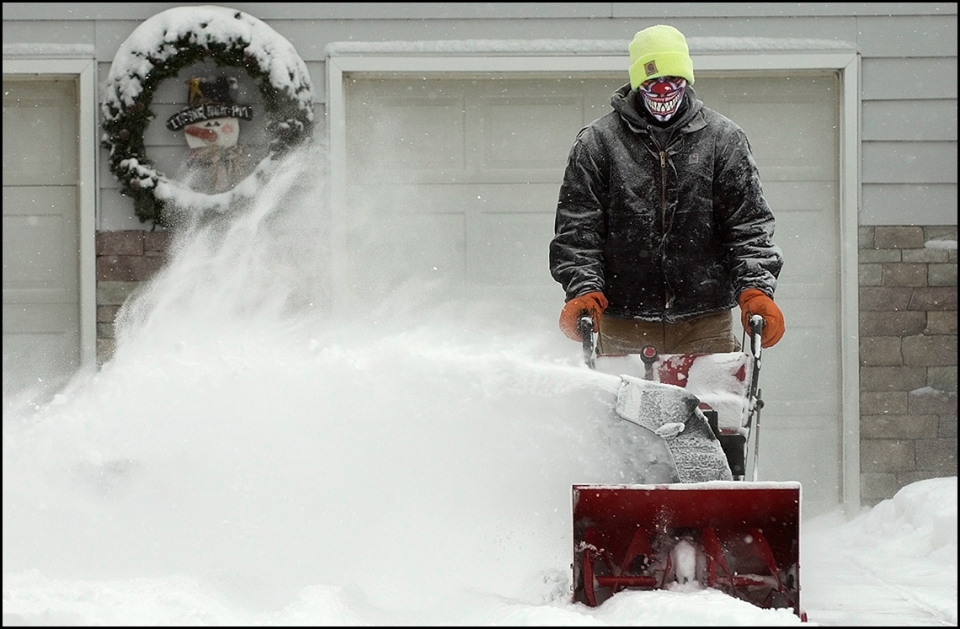 Tim Casteel, of Kankakee, clears a driveway on Northwest Circle in Kankakee on Tuesday afternoon. Casteel said he had been clearing snow since about 8 a.m. and donned the demented clown ski mask because it was the only thing he had to keep his face warm.

Kankakee High School seniors, Alex Tapia, front, and DeAngelo Strickland, right, shout as a vehicle passes by honking its horn in front of the high school on Tuesday afternoon. The students were supporting the District 111 strike. 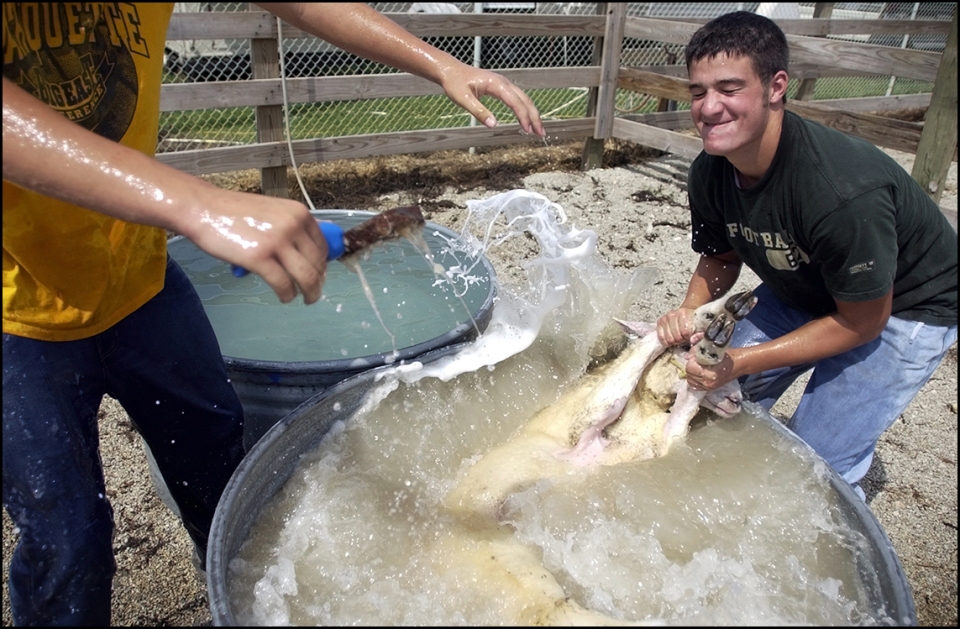 R.J. Nugent, 16 of Peotone, grimaces as he expects to be dosed with more water as he flips a sheep over to scrub it’s belly at the Will County Fair. Nugent’s partner in the sheep scrubbing, Jake Benjamin,15 of Peotone, left, backs off as he receives his share of water.

Matt Gehris, of Channahon, ice fishes on a lake at the Mazonia South Unit in the Mazonia/Braidwood Fish and Wildlife State Park. 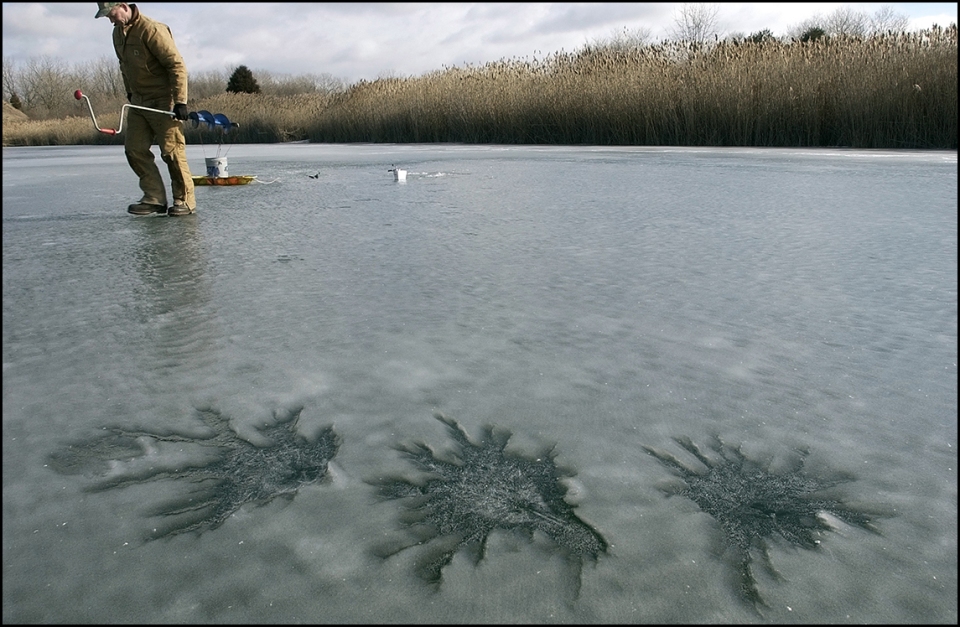 Jimmy Ritze, of Braidwood, begins to move his gear and look for another place to ice fish at a lake in the Mazonia South Unit in the Mazonia/ Braidwood Fish and Wildlife State Park.

Matt Gehris, of Channahon, drops a fishing line into a freshly drilled hole in the ice at the Mazonia/ Braidwood Fish and Wildlife State Park.

A man plays fetch with his dog at Perry Farm in Bourbonnais during a warm spring day.

Pastor Dave Robinson, with Genesis Community Ministries on Indiana Avenue in Kankakee, prays with a visitor to the drive-up prayer booth in the church’s parking lot. 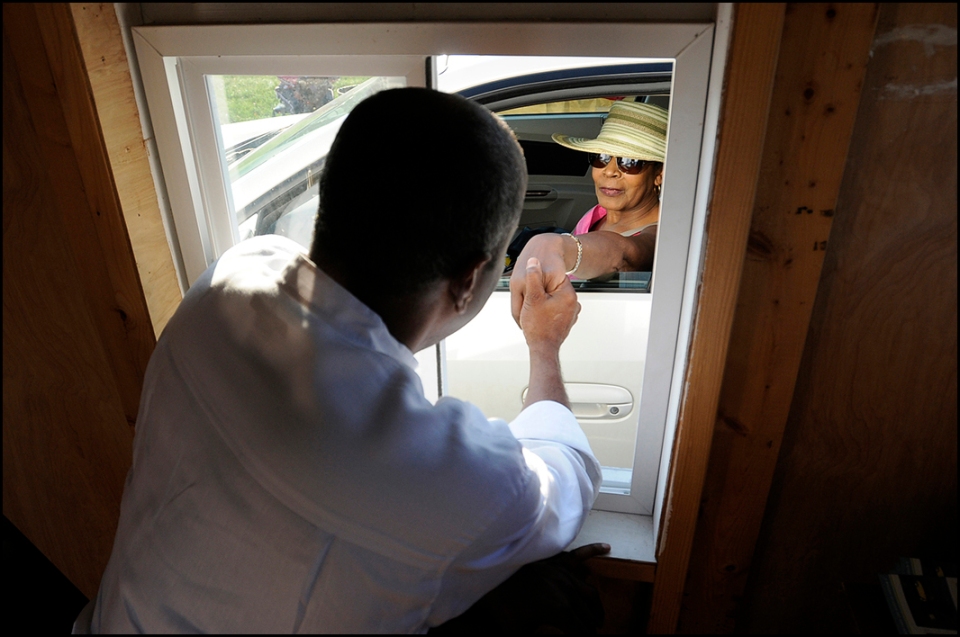 Edna Dixon, of Kankakee, a member of Genesis Community Ministries in Kankakee on Indiana Avenue, extends her hand as she prays with Pastor Dave Robinson at the church’s drive-up prayer booth. Dixon said she enjoys having the drive-up prayer booth since everything else seems to have a drive-up window.

Pastor Dave Robinson, with Genesis Community Ministries on Indiana Avenue in Kankakee, prays with a visitor to the drive-up prayer booth in the church’s parking lot.

Father Richard Kostelz inside the chapel at St Mary’s Hospital in Kankakee. 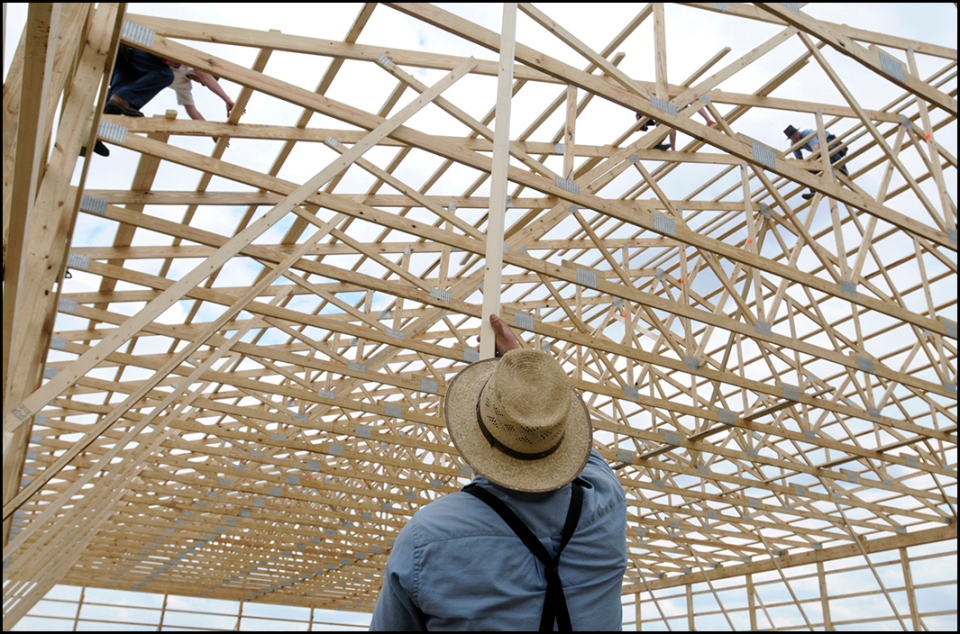 Atley Schwartz, co-owner of D&L Metal Sales in LaGrange, Ind., hands a two-by-four to be nailed to trusses as the company builds a barn on a property on 8000E. Rd. in Ganeer Township.

Daniel Schwartz, co-owner of D&L Metal Sales in LaGrange, Ind., works on building a barn on a property on 8000E Rd. in Ganeer Township.

Ethan Wilson,11 of Herscher, shucks some corn with his grandfather Jerry Wilson, of Herscher, across from him.

Samantha Gonski,8, receives ashes from Deacon Euchrist Marcotte, as her sister Madison,6, curiously looks from behind. 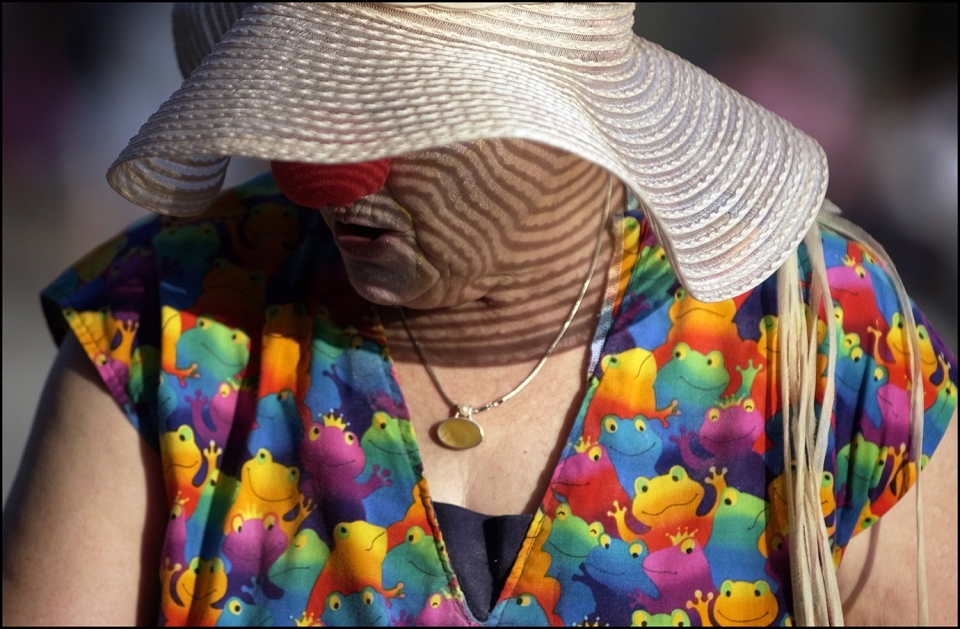 The sun casts shadows onto Delores Morrison, of Momence.